Knives That Make The Cut

The uniqueness of a santoku knife can be seen in the blade itself. The knife features scalloped edges which trap air between the knife and the ingredients being cut to make it easier to remove the knife from the ingredients. Santoku knives are exceptional for slicing quickly and precisely. They are also fantastic for getting the perfect thin slice that regular chef knives struggle with.

The way the weight is distributed in a chef knife makes it an excellent choice for people with small hands. The knife is top-rated among women chefs especially. A santoku knife is an excellent tool for any chef’s kitchen as a general purpose knife.

Origins of the Santoku Knife

The knife was loved by Japanese chefs for being shorter than the Western style and having a more even weight distribution that made slicing and cutting easier, especially for those with smaller hands. 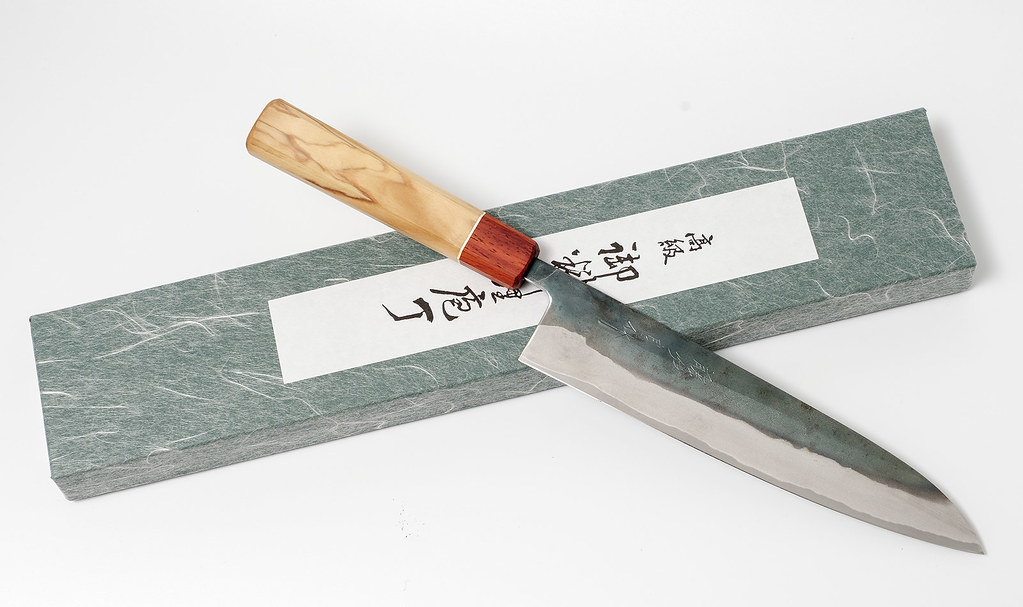 The word Santoku translates to “three virtues.” The three virtues alluded to by the name are meat, fish and vegetables; staples in the Japanese diet and what the knife is known to cut through best. Some people have also interpreted the three virtues to mean chopping, dicing, and slicing.

After capturing the attention of many top chefs, the santoku knife became the most widely-used knife in Japan. Not too long after, the santoku knife found its place on the world stage and became one of the most popular knives around the world. The knife is now frequently used in both professional restaurant settings and for at-home use.

​Differences of a Chef Knife and Santoku Knife

Before we dive too deep into the details of what is a santoku knife, let’s talk a little bit about what separates a santoku knife from a chef knife. Here are some of the key differences:

The main differences between the two types of knives are mostly where they originate from and the shape of the blade.

Although there are quite a few differences, the knives also share some similarities. Both blades can be used for general purposes such as chopping, slicing, dicing, and mincing. They are both very commonly used knives in both at-home and professional restaurant settings.

Both knives are also typically made with steel. However, the steel used to craft the santoku knife is heavier Japanese steel than the Western steel used to make chef knives.

​Details of a Santoku Knife 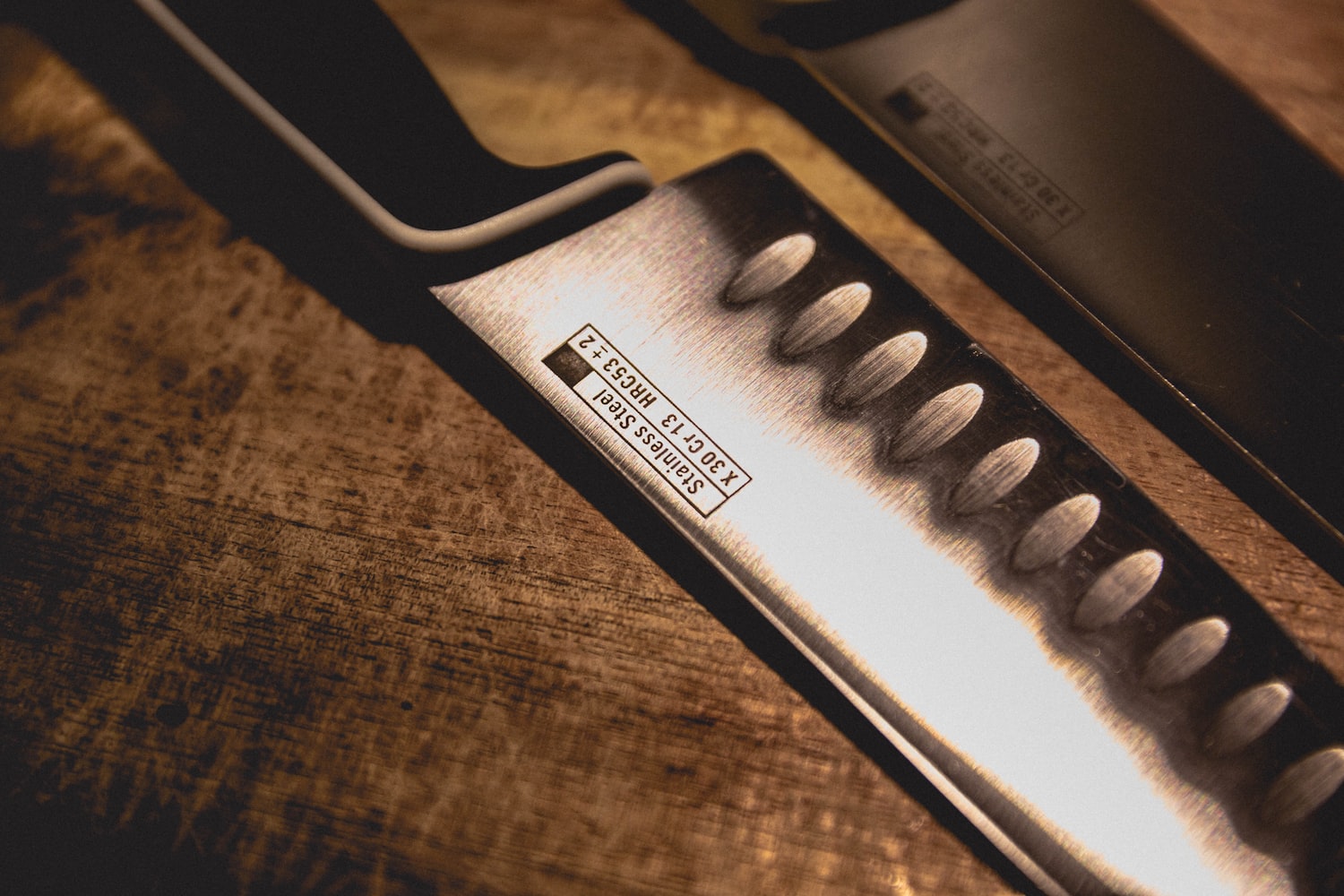 When you ask yourself, “what is a santoku knife,” there are certain things you would like to be answered. To help give you the best representation of a santoku knife, we have outlined some of the key specifications and details.

​Size of the Knife

Santoku knives are about the size of an average hand. The smaller size of the knife makes it much easier to handle than the ordinary chef knife. Chefs with smaller hands will enjoy the ease of a santoku knife much more than a chef knife.

​Build of the Knife

​Santoku knives are quite heavy and come with a boxy frame. Because of the boxier shaper, this knife weighs more than shorter knives typically would. It’s also heavier than standard chef knives because of the Japanese steel which is used to make it, which is denser than the steel used to make a chef knife.

The edge of the knife is straight and lacks the sharp point that many chef knives feature. Without the pointy tip, a santoku knife can deliver a much cleaner cut. The lack of a pointy tip also makes this knife much safer to use as it doesn’t unintentionally pierce into things. Though we found many advantages of the absence of the pointy tip, there is a disadvantage when it comes to slicing repetitively. For chefs looking for quick, repetitive slicing, a chef knife would work better for you.

​One key difference between a santoku knife and a regular chef knife is the bevel. The bevel of a knife is the angle that forms the cutting edge. The smaller the angle, the easier it is to slice with the knife. Knives can feature either a single or double bevel, meaning that the blade is tapered on one side or both sides.

Traditional santokus knives feature a 12-15 degree angle and a single bevel, meaning you can only slice on one side. Santoku knives can also feature a double bevel; however, the single bevel models are more common.

Western chef knives are typically double beveled, meaning you can slice on each side. Chef knives usually feature an angle of 20-30 degrees, larger the angle on the santoku knife, making it less-precise to slice with.

​What It’s Used For

​When it comes to finding the perfect knife, it’s all about making sure you have the best knife for your ingredients. The santoku knife is best for thin slices of meat, cheese, fruits, and vegetables: many of the staples of a Japanese diet. These knives are great for preparing meat and cheese boards, cutting thin slices, or dicing and mincing.

When it comes how the santoku knife compares to the chef knife in practice, the chef knife is a lot more versatile. In addition to making lots of thin slices with a chef knife, you can also use the pointy tip to separate a chicken or other meat parts.

​How to Choose a Santoku Knife 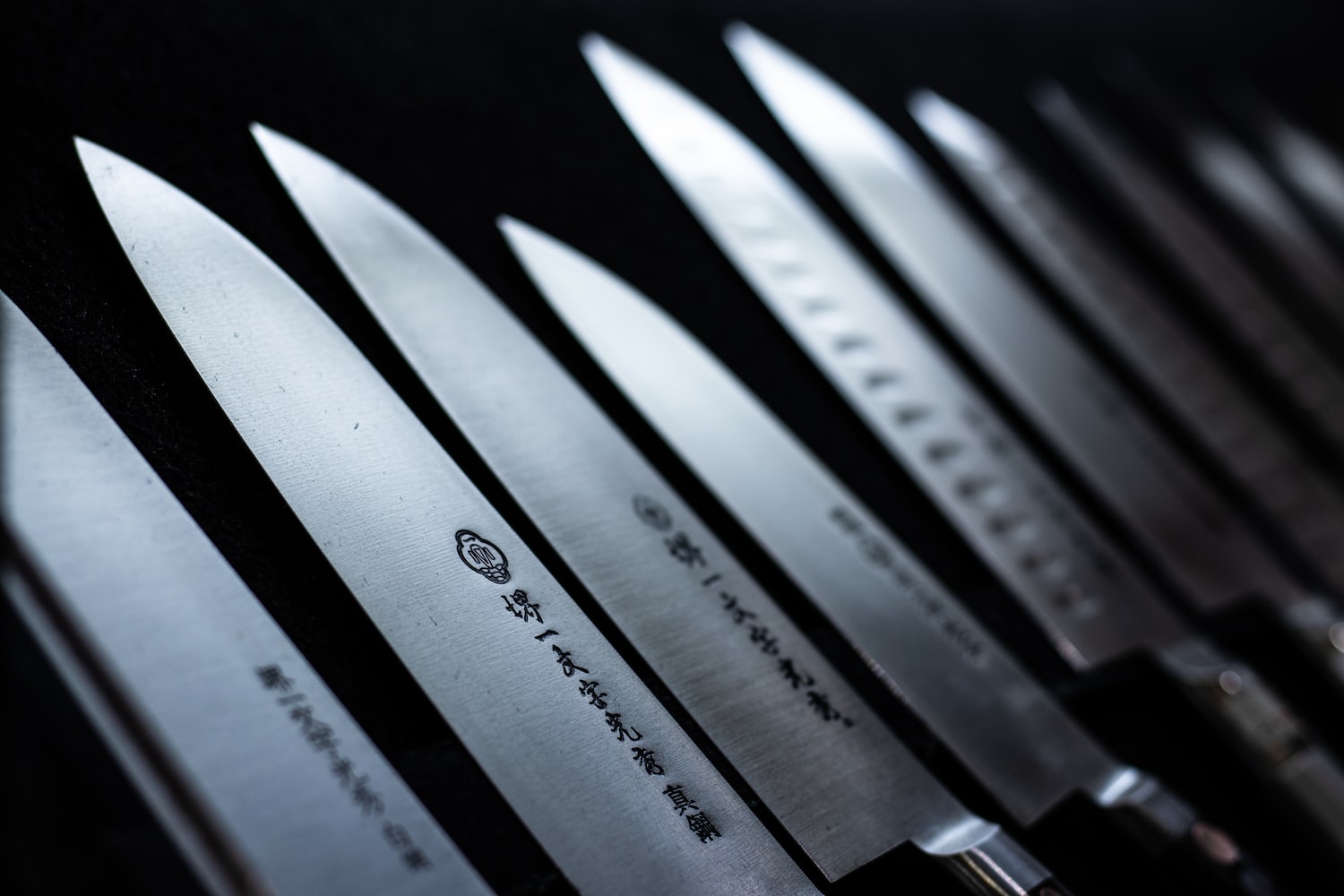 While stainless steel offers excellent benefits to the longevity of the knife, all good chefs know that the key to a good knife is how sharp the blade is. For the most sharpened blade possible, you’ll opt for a high-carbon steel knife.

You’ll also need to consider a comfortable price point when purchasing a santoku knife. A santoku knife shouldn’t cost you too much cash, but it is worth spending a little extra money to get a good quality knife since a santoku knife is such a great all-around tool in the kitchen. If you have a budget of $150 or less, you’ll be able to find a high-quality, durable, sharp knife that will last you many years down the line.

Now that we’ve talked about what is a santoku knife, we’re sure you'll agree it’s one of the best knives to have in your kitchen. While the santoku knife isn’t quite as versatile as a regular chef knife, it still serves as a great all-around knife, especially for chefs who enjoy a smaller knife.

With the santoku knife, you’ll have more control, a more comfortable grip, and more precise slicing. We suggest looking into getting a santoku knife for yourself as soon as you can to enjoy quick, easy, and accurate slicing of meats, cheeses, and vegetables.

As a participant in the Amazon Services LLC Associates Program, this site may earn from qualifying purchases. We may also earn commissions on purchases from other retail websites.

The Ultimate Guide to Kitchen Knives to Help You Stay a Cut Above the...

How to Sharpen a Knife: The Ins and Outs You Need to Know

The 4 Best Throwing Knives for Effective Self Defense

The Importance of Having a Proper Knife Holder

10 Different Types of Knives You Should Get to Know

DISCLAIMER
Knives That Make The Cut is your resource for "sharpening" your knowledge and finding the perfect knife for you!
Contact us: george@knivesthatmakethecut.com
FOLLOW US
© © Copyright 2019 KnivesThatMakeTheCut.com